Metal Curse: The new album, Filth, is awesome! But let’s start at the beginning. When did Waco Jesus form and why “Waco Jesus”?
Shane Bottens: Thanks bro, I’m glad you like it. Guitarist / freak Kevin Menssen formed Waco in the early ’90s, the name means absolutely nothing. I think the name was thrown out there when the band was just starting and after serious consideration (3 beers), Waco was born.
MC: Have there been any lineup changes since the beginning?
SB: Yeah, Dave Kibler (Lividity) quit to focus on his band and was replaced by brewmaster Chris Sweborg, and our drummer Nick Null pasted away about three years ago and was replaced by the Silvis, Illinois legend Johnny Baker.
MC: What were some early musical influences, and what kind of stuff are you guys listening to these days?
SB: We probably have the same influences as everyone else who plays this type of music, anything fast and aggressive. As a band we are very diverse when listening to music, I really like Misery Index’s new stuff, Kevin and Chris listen to all sorts of shit. I really don’t know what they have been getting into lately. Johnny, who fucking knows, the Car Wash soundtrack maybe.
MC: Did all the scat images in The Destruction of Commercial Scum’s packaging get any complaints? Any trouble getting the printing done?
SB: No, the only complaints that I’ve ever seen was how fucking disgusting it was and I don’t take that as a complaint, that’s a compliment. Printing problems? None. There is always some capitalist out there willing to print anything for a buck. God bless America.
MC: How was the response to the Destruction…?
SB: The response was amazing for that CD, and I think that Filth will have an even better response.
MC: Why not stay with United Guttural for the release of Filth? And how did you get the deal with Morbid records?
SB: Nothing against UG, Rich did an excellent job getting our name out. We considered releasing Filth with UG, but felt that Morbid records could take us to the next level. Dave (Lividity) and I were talking one night and he said we should talk to Morbid records, and just before going to the studio we agreed to a two CD deal with them.
MC: As I mentioned above, Filth is a great album! How long did it take to write, and how does the songwriting process work for WJ?
SB: It took some time to finish this CD. Everyone lives in a different town and we are only able to practice once a week. We were trying to work on old songs with the new drummer, prepare for shows, and write new songs all at the same time. Not to mention that two of us drive two hours one way to practice. The songwriting process is nothing more than coming up with some good riffs, putting some blazing drumming to them and then letting me spend three months writing lyrics to the song.
MC: I realize that the new album hasn’t been out very long yet, but what’s the reaction like so far?
SB: So far so good. I’ve only read a couple negative reviews and those people are probably gay, so fuck ‘em. 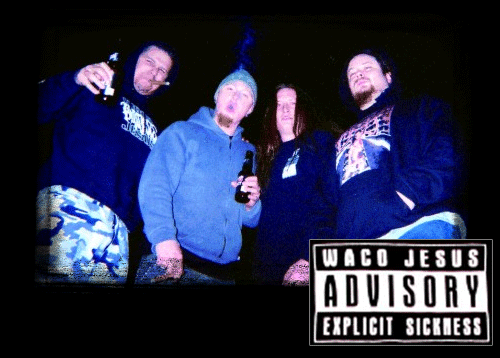 MC: Some people (meaning: not me) might say that you use the “shocking” images and song titles to draw people to the band, and that you should lose the shock factor and concentrate on the music. I would say that the songs are excellent and stand completely on their own as prime examples of the genre, and that any complainers just don’t “get it,” but how would you respond?
SB: I think the music could stand on its own, especially the new CD. The people who think that way are complete fucking idiots. We spent a lot of time on the layout design of Filth, and I know that I fucking hate it when I buy a CD and you can tell the shit has been thrown together. Absolutely no thought about anything, which is stupid. When people are sifting through CDs to buy, if your artwork looks weak they will think the music is weak and pass it up. I think you have to have both for a CD, interesting artwork/design, and interesting music and lyrics.
MC: I’m sure that you get some bullshit from people (who probably never read your lyrics) about being misogynists. What are your thoughts on that and political correctness in general?
SB: Actually I have never heard shit about my lyrics, and as far as political correctness, I use this line in a song and stand by it, “being politically correct is pure fucking bullshit.”
MC: Everyone wants to know: where do you get all the cool pictures?
SB: If I told you that then everyone would concentrate on the shock factor and not the music like we do, and our formula for success would be revealed.
MC: Does WJ have any other releases (demos, 7”s, unreleased tracks on comps, etc..) besides The Destruction… and Filth?
SB: No. So if you don’t have them, buy them.
MC: The Milwaukee Metalfest is, I guess, the biggest Metal festival in the US. What’s it like to play that show and how does it compare to other big festivals?
SB: It’s not like it used to be when Jack had it at the Eagles Ballroom. I’ve been to every Metalfest, except the one when Nick died, for the past 13 years, and the turnout seems to be getting thinner each year. But for underground bands it’s an excellent way to get your name out there and play to crowd sizes that you would not normally see. So it does have some positive points.
MC: What was your best/favorite performance?
SB: Come on, Ray. All of them.
MC: Any crazy stories from the road or backstage? I can only imagine what Waco Jesus groupies must be like!
SB: Groupies, dude I play in a shit-rock band.
MC: So the picture of the girls with the Waco Jesus tramp-stamps on the cover of the Morbid Records catalog isn’t real?!

Fucking Photoshop…
What’s next for Waco Jesus?
SB: We have been taking to P Diddy and could be on the next series of Making the Band.
MC: When can we buy “I Hope He Beats You” t-shirts?
SB: That’s funny, we do have a couple of new designs on the website and two more in the design phase. Look for those in the next month.
MC: Anything else you’d like to add, or plug (merch, website, etc.)?
SB: Yeah I’d like to plug Shawn’s (Putrid Pile) mom in the keyster. Thanks again Ray. Everyone please log on to www.wacojesus.com and purchase something goddammit.